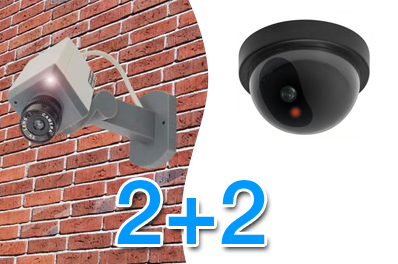 Dummy cameras are a low cost solution if you're not able to spend a lot of money on a real security camera system or closed circuit system.  A fake/dummy security camera can be an economical way to add more security to an existing surveillance system or where there was no system present.  Although dummy cameras won't catch the criminal, studies have shown that just the presence of a security camera has been known to prevent the crimes like robbery, theft and vandalism from even taking place.

Now you can deter robbery, theft, and vandalism with a Dummy Security Dome Camera. Dummy cameras are non-functioning security cameras that are meant to trick the person into thinking they are real surveillance cameras.  One of the properties that makes this Dummy Security Dome Camera look so realistic is the blinking LED light that both draws attention to it and adds to the effect.  Operates on 2 x AA batteries (not included).

Great for the home, office, school or any location where you need a visual deterrent for thieves and unwanted visitors.  This Dummy Camera is simple to install and features an in-built motion detector which swivels when it detects movement and proceeds to flash a bright red LED light.  The camera pans from left to right every time movement is detected.  The unit also includes realistic wiring and operates on 3 x AA batteries (not included).